It's been almost a month since I last wrote. November has been a pretty cool month so far! The most exciting thing was, the week after Halloween, I was the 97x woxy.com pic of the week!!! This was super exciting. 97x is this really great radio station out of Oxford, Ohio, and I listen to it almost every day through the internet at work. On Halloween, they were asking people to call in with requests, and to let them know if they were wearing a costume. Of course, I emailed in a request, and included a pic of myself dressed as a bunny on my webcam. Here is what you would see if you clicked on the "97x pic of the week" link at woxy.com. Alas, I am no longer up, but it was great while it lasted. 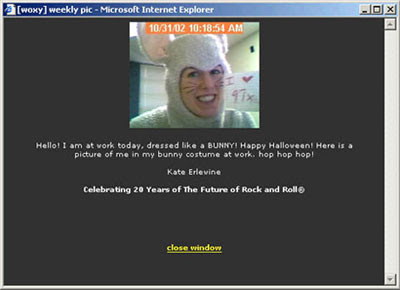 Let's see, what else happened this month. Oh! I had fun visitors!!! Julie and Kelly came down the second weekend. We had a really great weekend. We did a lot of shopping (especially at Payless), and played games and cooked dinner and went to some bars. It was a fun time. The following weekend, Emma came to visit! And she finally got to meet kitty Emma! That was fun. Emma (girl Emma) and I went out to dinner, went to bars, watched movies, etc. Whee!! I'll try to remember to post pictures. The weekend after that, Rabecca had a birthday party at her house. The party was for Aryn and Dawn. It was a great party. I got to go in an outdoor hot tub for my first time EVER! That was really cool. There were a lot of us crammed in there. We all recently decided what we're going to do for New Years. A bunch of us, about 14 people, are going to rent out this huge cabin out in the country. There is a HUGE outdoor hot tub, so I'm really excited for that.

Thanksgiving was really fun! It was the smallest gathering we've had in a really long time, because my sister and her husband were visiting friends in San Francisco. So it was just Adam and I, and mom and dad.

So the last three weeks have been super busy! We'll start with Halloween. Halloween was a great day. I got to wear my bunny outfit to work! The only other person in my office that completely dressed up was Tracy. He was Ash from Evil Dead. So we were basically complete opposites. That was really fun. Summer wore her bunny outfit to work also! Her company was having a Halloween breakfast, so I met her for that at 8:30. It was DELICIOUS! Then, that afternoon we went uptown and ate lunch at Subway. She came to my office to pick me up so that all my coworkers would get a chance to see her. That was great. Nobody else uptown was dressed up for lunch. Party poopers. 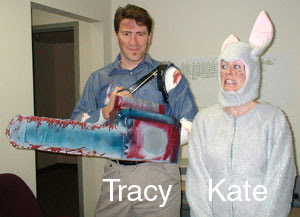 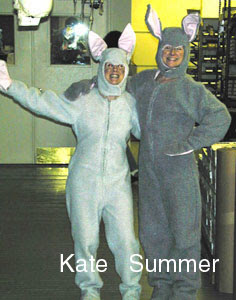 That weekend, I had some guests come down. Kara, Jenny, Anne, and Tim. Friday night we drank some beers at my house, and looked at a bunch of funny web sites. Tim's brother Joe was playing at the Union, so we all went up to see him play. After him, this act called "Captured By Robots" played. I've seen it once before. It's REALLY weird. It's this one guy, and he wears a really creepy mask, and he has an entire band of robots behind him. They're all different looking. There's one tall lanky wirey robot, and there's also a HUGE Chucky Cheese-like monkey robot. Ick. It's scary. And three or four other robots. He has them all rigged up so he can make them say stuff whenever he wants, and have their lights blink and stuff. Overall, I would say it's a cool show, but probably a little too creepy. My sister was there for that show too, so that was fun.

The next day we went to Taco John's for lunch. Mmm! Then we hung around all day and worked on our costumes. Well, I didn't have to work on mine because mine had been done for ages, but everybody else did! I had a bunch of people over that night to hang out before we went to the Uptown Block Party. Athens has a HUGE block party every year on Halloween. Thousands of people bombard the streets of uptown, dressed in costumes. It's nuts, and also really fun. At my house we cooked up a huge pot of chili and made cornbread. We hung around and had some drinks, played some games, then went uptown. PICTURES COMING SOON!!! Uptown was really fun. We stood on the Courthouse steps so that we could see everybody better, and we hassled people who weren't wearing costumes by yelling "NICE COSTUME!" to them. Ha ha we're cool. Then we went to the Union to hang out for the rest of the night. We were a motley crew. 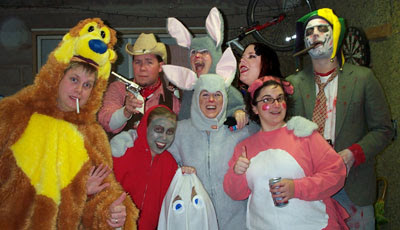 Here we are! Tim = The Bear in the Big Blue house; Jason = cowboy; Anne = Elliot and ET when they dressed up for trick or treating; Summer and Kate = bunnies (duh); Kara = Succubus demon; Jenny = Popple; Schuster = scary evil Jester. There was a whole other group of people, but they had headed uptown already. As I said, more pictures coming soon!!

The following week wasn't very eventful. At work, we were putting the finishing touches on our total site redesign, which was very exciting! Other than that, I had an eye appointment AND a flu shot. Oh and I voted. That brings us to this past weekend! I had more guests! Kelly and Julie came down. On Friday night, Adam and I went to my friend Carrie's birthday dinner. It ended up being at the China Fortune, and it was DELICIOUS. Everybody brought a bottle of wine, so there was a lot of delicious wine to sample. Afterward, we all went to Carrie's apartment for some DQ Ice Cream Cake. MMMM! After that, I met up with Julie, Kelly, and Jason uptown. We went to Tony's and the Union.

On Saturday, Julie, Kelly and I went shopping. I bought myself a new game! It's really really fun. It's called Electronic Catchphrase. It kind of looks like a cd walkman. How you play is, there's a little computer screen on the game, and a word comes up. You have to get your teammates to get the word by giving them any hints you can think of. Meanwhile the little thing is beep beep beeping. When they guess it, you pass it to the opposite team. Kind of like Hot Potato. When it goes off, whatever team is holding it loses that round, and the other team gets the points. It's super fun. That night, we cooked dinner. We made whole wheat spirals, with red sauce, zucchinis, and mushrooms. Also salad and bread. It was delicious!

After dinner, Kelly, Jason, Julie and I played Catchphrase. After that we went up to the bars. We went to Tony's first, then the Union. (Notice a pattern?) I decided I wanted to have after hours, so Dirty, Jason and I went to pick up some beer. After that we met up with Julie, Kari, Kelly, Craig, and Ali. On the way to my house we decided to stop by another after h ours party that we had been told about. It turns out it was a gay party and they weren't very welcoming of us. They made us leave because we brought a (very clean, very harmless) bicycle inside. Oh well! So we went to my house instead, and played fooseball and Catchphrase all night. Whee! We stayed up too late - til 6:30 AM. I should be catching up on sleep RIGHT NOW but oops! I'm working on my web site! The next morning, Julie, Kelly, Adam and I went to Union Street for some breakfast. It was delicious. Afterward, the girls did a little more shopping.

Whoo. Today is Monday. We had our weblaunch party at work! It was really fun. I made cupcakes, and Tracy brought cheese, pears, apples, and champagne. MMM!!!! cupcakes. That's all for now. Lots of pictures coming soon! Halloween, various pictures from the summer, lots of kitties... and there was an entire roll of film taken at the after hours party so if any of them turn out good I'll post those. good night!