This was a pretty great, fun-packed weekend! Friday night, I went over to Mer's house to have Gin Rummy night and a Pizza Party with Mer, Pete and Joey. Mer was the big cards winner. We seem to have a problem remembering whose turn it is to deal, so I'm going to buy one of those visors with the blinking lights before our next card night, and the dealer will have to wear it. That will be fun! AND brilliant. Haha. No pun intended.

Saturday night, Adam and I ordered Indian food and then headed up to Casa for the annual Gong Show, which is Athens own version of the classic game show. Chuck Bare Ass was host, and Charlie, Bob and Amy were the "celebrity" judges. They decided whether contestants would receive a prize, or a consolation gift of a can of vienna sausages.

There were lots of amazing acts, including a girl who played the kazoo while twirling a hula hoop around on her arm, all while wearing a bathing suit! Another girl did a gymnastics routine, which included walking on her hands across the floor, and doing back flips!

Towards the end of the night, there was a spectacular performance by these three fellows, two of them sang the Beatle's "Blackbird," while the other stripped off his shirt, chugged SEVEN shots of whiskey, and then puked into a pitcher. Ew. It was a fun and crazy show. 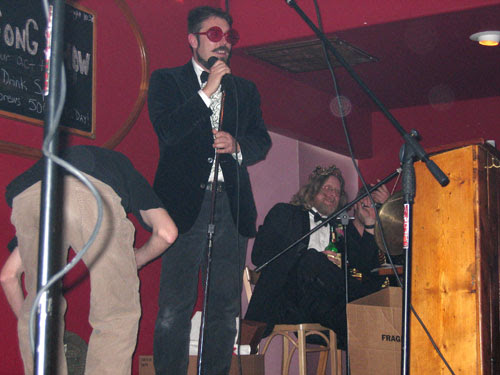 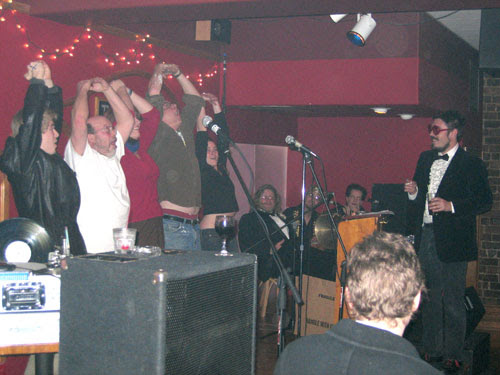 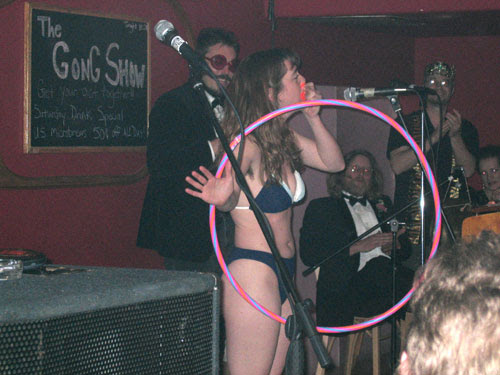 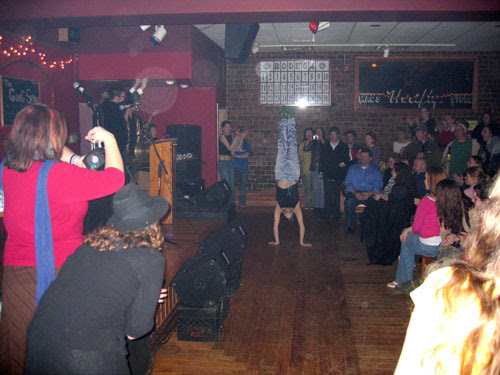 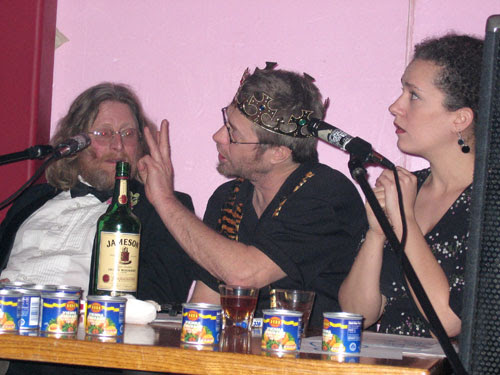 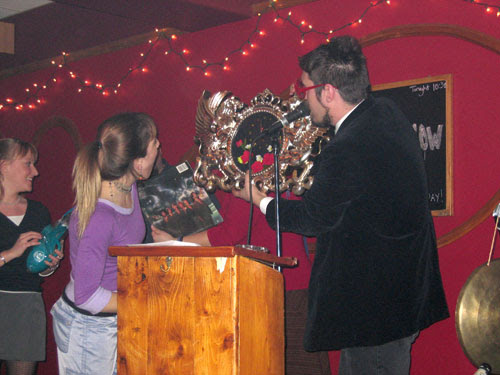 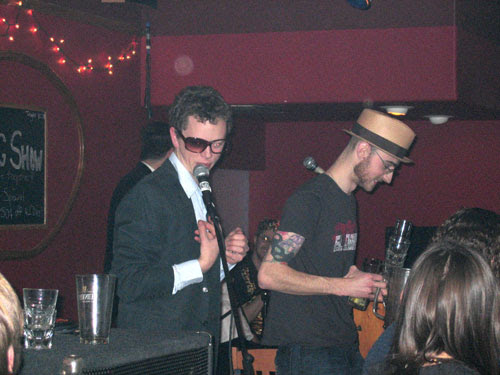 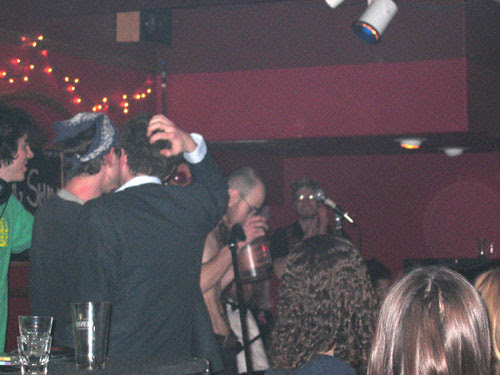 Sunday night, Adam and I scored an invitation to Mom and Dad's house for dinner. It's better than a restaurant. We had the most amazing Sea Bass. I swear it was the best fish I've ever had. Also, seasoned brown rice, salad with grapes and blue cheese, fresh chopped mango and cilantro salsa, multigrain garlic bread, and a light cream cheese, yogurt, honey and fruit frozen pie in a graham cracker crust for dessert. Gourmet! Yum. 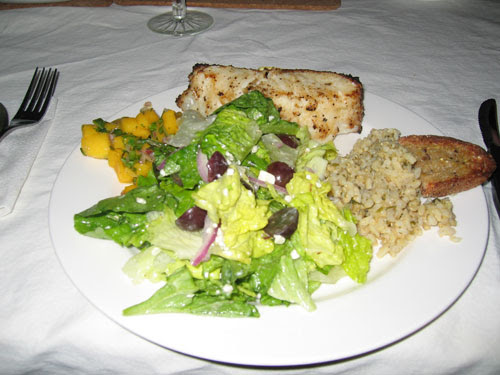 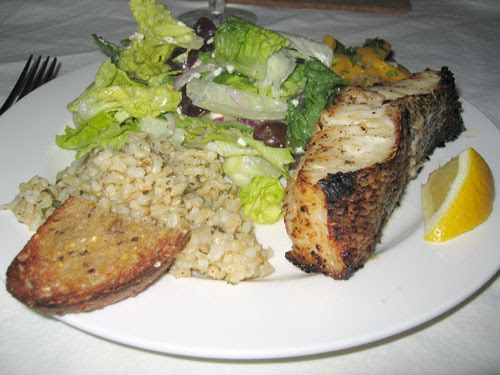 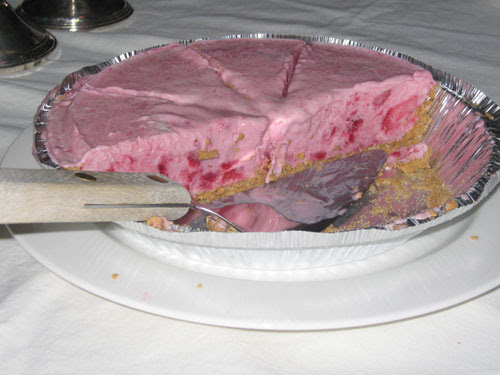 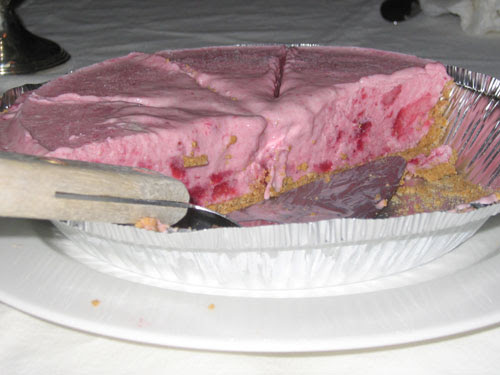 Tonight, Joey and I worked on a flyer for Kaleb, our buddy who was recently diagnosed with non-hodgkins lymphoma. In an effort to provide support, a bunch of Kaleb's friends have decided to grow mustaches. A flyer needed to be made to help spread the word.

Last week, Joey and I went to the library to do some mustache research, and literally 30 seconds after we got the library and sat at a computer, THIS MAN sat down at the computer next to us!! 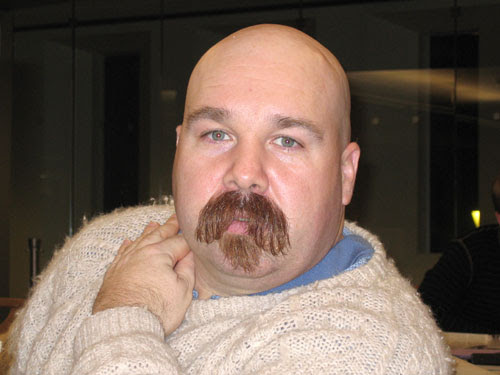 I thought I was going to explode from trying not to crack up. Luckily Joey was more cool and collected, and kindly asked the man if he would be willing to have his picture taken for a good cause. He said yes, adding "I just trimmed it up yesterday!"

Here is the finished product: 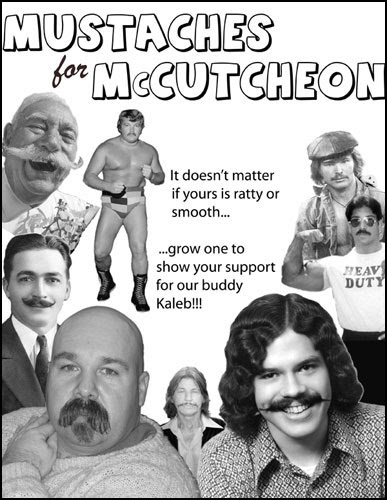 Maia and Chris had a small wedding and reception, and later threw a reception PARTY so that they could celebrate with their friends! It was a great time, including delicious punch, delicious cake, a really cute cat and headstands! There was also foosball, which I was excited about because I hadn't gotten to play in ages. 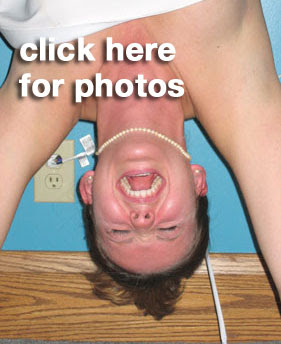 Click here for photos.
Posted by orangek8 at 11:41 AM 0 comments