The weather was perfect this year for the Slip 'N' Slide. Hot and sunny! The slide was fun as usual, with the added bonus of an actual pool liner at the bottom. The plastic sheeting was a different brand, and the consensus was that we did not like it as much as the old stuff. Another improvement this year was Summer's inflatable pool, which offered another spot to cool off!

There were lots of delicious snacks as usual, and plenty of delicious drinks. This year was a little more dangerous than usual, with a grand total of two trips to the emergency room! Jason went down the slide haphazardly and hit the back of his head, splitting it open. It sure was bloody. He ended up getting six staples in his head! Ouch. The other casualty was Clark, who got stung in the face by a bee! The wound didn't seem that bad that day, but the following day when he got back to Dayton, it swelled up more and the swelling moved onto his neck, so he went to the hospital. Eek!

Even with the added perils this year, the event was a huge success. There were many, many harmless runs down the slide, so much summertime fun! And the hot tub, and the pool, and the carrot cake... What a party!

Also, Anne and I were drinking Miller High Life Light, and were talking about how the bottles are so old-fashioned, and if we had black and white pictures of us drinking them, they would look TIMELESS! So we kept trying to look "timeless" with our beers. Here's one of Clark, too, because PBR is old-fashioned too. 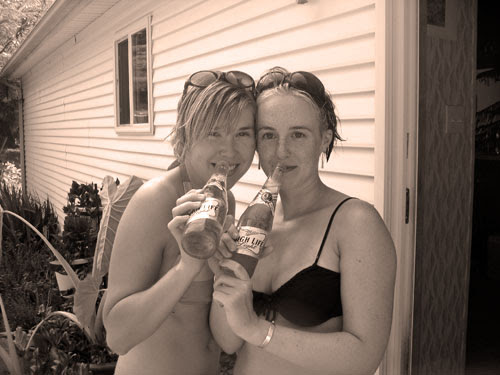 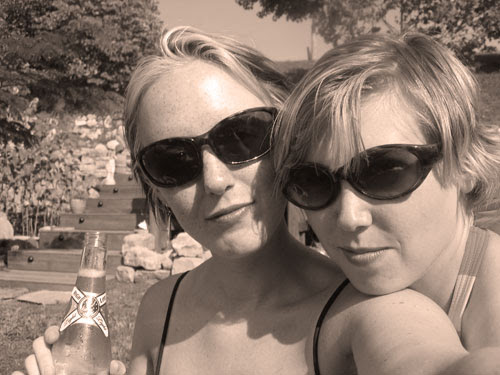 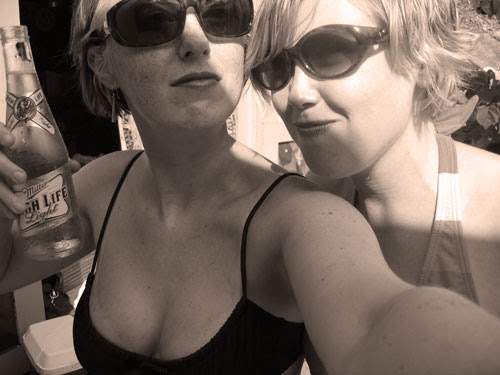 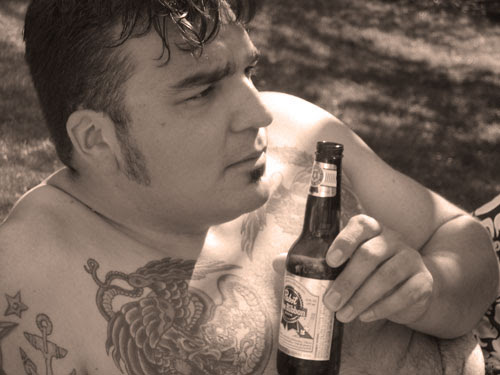 Yumi had a little pre-Slip 'N' Slide dinner party tonight! I decided to bring a layer cake. Banana-Raspberry with Lemon Cream Cheese Frosting. I had never made a layer cake before, I just bought the pans last week! So, that was exciting!

Yumi made an Italian feast! We had salad, bruschetta, grilled veggies, and spaghetti and meatballs. After dinner, we had coffee with kahlua and whiskey, and shot the shit. It was a nice time, and great to see everybody!

Click here for photos.
Posted by orangek8 at 1:15 PM 0 comments

I had some internet friends visit me today!! Melissa and Jess were driving a car from Denver to Boston, where it's new owner lives. They stopped in towns along the way to visit different girls from the message board!

I got them on Wednesday night. We went to Purple Chopstix for a taste of Athens! Then we hit up Tony's and The Union. The next morning of course was spent at Casa for brunch! It was a quick visit and I was sad to see them go! They still had a lot of driving ahead of them, though.

Click here for photos.
Posted by orangek8 at 1:18 PM 0 comments

Rose and J'aime visited this weekend! We had quite the nice time. Friday night, we had Pita Pit for dinner! Then we had lots of rounds of beers at Casa. We almost drank a Fruit Basket... a great concept I'm currently working on. More on that at a later date.

On Saturday, Rose and I made whole wheat blueberry pancakes and eggs with spinach and feta! They were delicious. Then we met up with Jason and J'aime and saw Willy Wonka! It was crazy! I liked it. Casa for dinner, then Apples to Apples!

Sunday was Casa brunch and then good-bye. Which wasn't as sad as usual because Rose is MOVING TO ATHENS. Well, for a three week trial period but I'm hoping the trial is successful!

Click here for photos.
Posted by orangek8 at 1:23 PM 0 comments

This weekend, Summer, Yumi, Melissa and I headed up to Detroit to spend a Girl's Weekend with Rabecca and Leighanna! We got to see Rabecca and Julien's new place, which has a pool!! The weather was perfect all weekend.

On the way up, we stopped at the North Market in Columbus for lunch. I went to this little Greek place and got a falafel! Of course, we got Jenny's Ice Cream for dessert. As usual, it was almost impossible to decide. I went with Bananas and Honey, since I love it, and tried two new flavors - Cucumber Fraiche, and Avacado with Lime. Both were incredible!

When we got to Detroit, we sat by the pool for a bit, and then had a little birthday celebration for Melissa. Rabecca had made cupcakes - white with strawberry frosting. YUM. And pink champahnyuh! Cheers! Then we went to Little Tree in Royal Oak for sushi. The sushi was incredible! They had good Tom Yum soup, also. I think Purple Chopstix's is better though.

Then we went bowling. This here country girl will never get enough of bowling in alleys where they score for you on COMPUTERS! And you can buy BEERS! It's just heaven.

On Saturday, we went to the Plymouth Art Fair. It's a 3 day event, with vendors set up all through the downtown. It's HUGE! I bought some earrings and an embroidered purse. Then I popped into a little boutique and OOPS, bought some jeans. They were 20% off because of the art fair! After the fair, we got some lunch and headed to the pool. Julien and his brother Blaise, who had just arrived from France for a week in the U.S., joined us!

Later, we made dinner. We ordered pizzas, and boiled some fresh corn on the cob, cut up watermelon, and made a salad. It was fresh and delicious! Then we played a fun dice game and headed to the club, Envy, where we danced and hung out.

On Sunday we had to head home. But not before enjoying the SECOND of Rabecca's delicious breakfast casseroles of the weekend. On Saturday, she made a hashbrown, egg and cheese casserole, and on Sunday it was a french toast casserole, that has ICE CREAM in it. Ice cream for breakfast. So good. Then we drove back to Athens! Quite a fun-filled weekend!

Click here for photos.
Posted by orangek8 at 1:27 PM 0 comments

We cooked up some greek turkey burgers on the grill, and everyone brought food! We played bocce and Apples to Apples and had beers. Then we headed to the Blue Gator to see the Speedknobs! Adam and I ended up heading to The Union and then to an afterhours party. It was a long night full of fun!

Click here for photos.
Posted by orangek8 at 1:39 PM 0 comments