I spent all weekend trying to kill a Spring Cold. I felt crappy all week last week but just kept assuming it would go away. Finally, Thursday afternoon I started to feel feverish and that's when the REAL cold hit me. I stayed home from work on Friday and went to Mom's house and watched HBO On Demand all day. Luckily Mom and Dad invited me over for dinner. They made Asian marinated tuna steaks, garlic buttered toasted pita bread, broccoli and salads with mixed greens, onions, strawberries, walnuts, and blue cheese. YUM! It PAYS to be sick!

Saturday I went shopping in Parkersburg with Mom. We had a nice time. I got a utensil holder for my kitchen, which I really needed! That night I went over to Summer's with Yumi to watch Sex and the City Season Six Part One DVDs and eat pizza. Mmm.

I finally am starting to feel better. Hopefully I'll be 100% by the end of this week. I'm going to Detroit this weekend!
Posted by orangek8 at 11:37 AM 0 comments

So, I just switched servers, which is why my site has been off and on for the past couple of days. All the files are on the new server now, and running smoothly so I'm back in action.

This was a good weekend, my friend Kara came down to stay with me, and a few other friends came into town too. Friday night before Kara arrived, Summer and I had dinner and a movie. We split a Trader Joe's Gorgonzola Pear frozen pizza and it was awesome. Delicious! We also had veggies and Mom's Marvelous Malibu Mango Mauis. The movie we watched was Mary Kate and Ashley's "When in Rome," to help psych Summer up for her upcoming trip to Italy!

Kara arrived that night and I met everyone out at the bar for a drink. The next morning I went to Parkersburg for some shopping. The goal was for Yumi to find a fun dress for her wedding reception but it didn't happen. We had a great time though, and yum! Olive Garden! Casa Nueva for dinner that night, then we went to see Joe play at The Donkey. He was awesome. Southeast Engine played too, it was a great show.

Sunday we had Casa for brunch (Casa two meals in a row, I'm the luckiest girl in the world!), then shopped uptown for awhile. Then I went grocery shopping and cleaned out the fridge. I started feeling exhausted, which I would find out on Monday was actually the beginning of a cold. It turned into a sore throat. Yuck.

I got my hair cut and colored last night, it's moving into spring and summer so it's time to bust out the fun colors. Pat, my hairdresser, got my hair REALLY bright red. It's fun! Adam's calling me Lola from Run, Lola, Run. 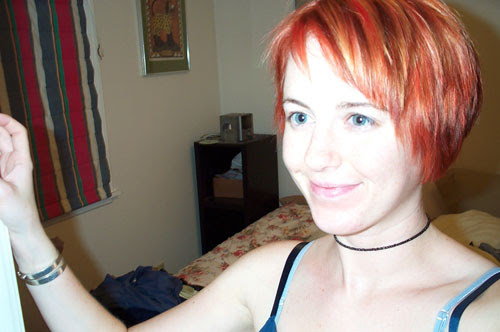 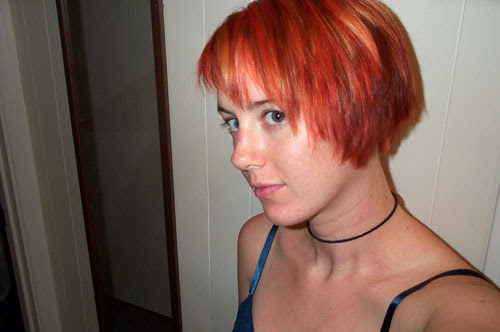 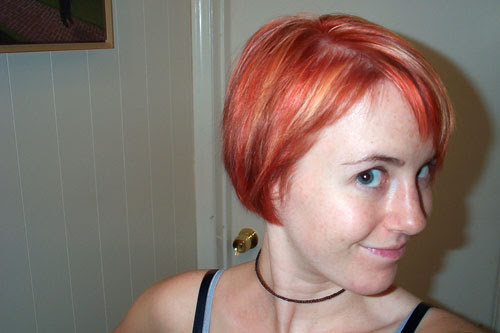 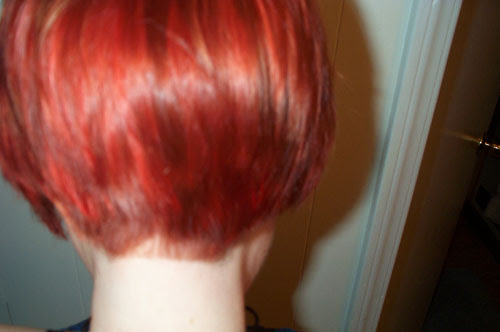 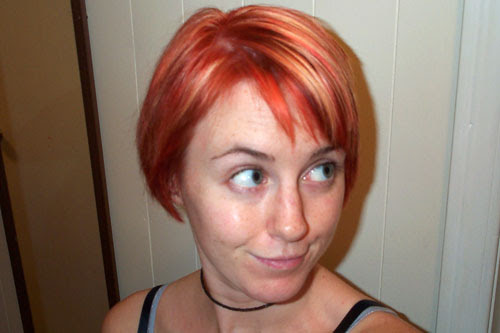 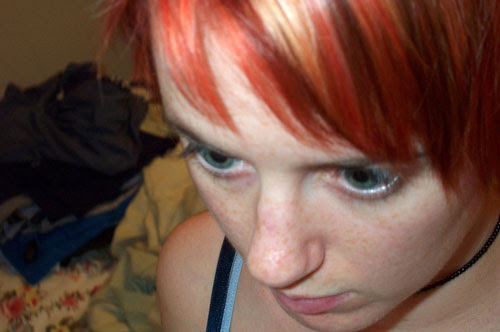 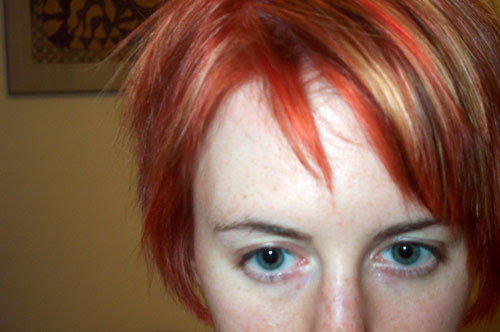 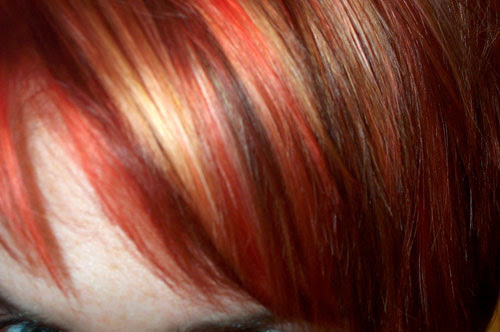 This weekend, I went to Dayton, Ohio to visit my friend Anne and her husband Tim. There were several things on the agenda for the weekend. Meeting their new puppy, seeing Anne's new haircut, going to Trader Joe's for the first time, but most importantly, seeing the new Mary Kate and Ashley Olsen movie, New York Minute, on opening night.

When I got to Dayton, we had some delicious Chipotle. I had a big vegetarian burrito, and the lady hooked me up with a lot of guacamole. After dinner, Anne and I went shopping for a bit then headed over to the theater. We were early so we got some stickers made with our pictures on them in a little booth. Dang, and I forgot to bring my stickers home with me! Oh well. Anyway when it was time we headed into the theater. I had been expecting the movie to be pretty bad, and that I would be wincing the whole time. It turned out to be pretty good though, and it had me laughing through the whole thing. It was fun because a bunch of punk kids sat in our row and obviously came in jest, but they seemed to be enjoying themselves as well. There were only 20 people in the theater. 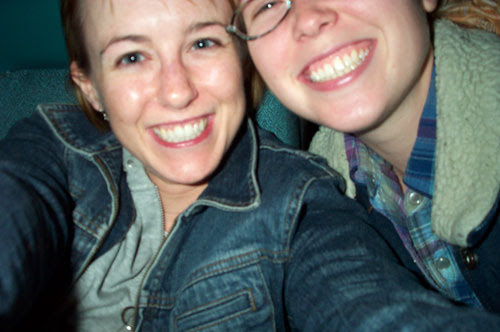 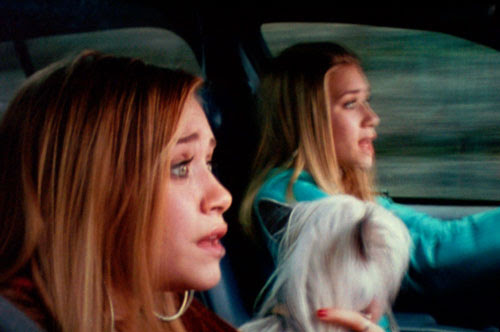 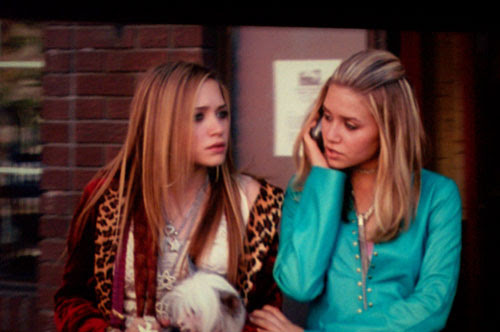 After the movie, we went back to Anne and Tim's, had some beers, and chilled in the hot tub. The next morning, we went yard sailing. I got some sweet vintage blingbling jewelry. After that, we walked Anne's dog Watts then got ice cream for lunch! We got these low fat frozen custard blizzards with Snickers mixed in. It was awesome. The weather was beautiful so we ate them on Anne's deck.

Then we got together a bunch of people and went to see Mean Girls. It was pretty good, but I would have to say I enjoyed New York Minute more. After the movie it was dinner time so we decided to cook out. My first cookout of the season! We made cheeseburgers, baked beans and corn. We also picked up some potato salad and chips and salsa. Everything was delicious. After dinner it was time for some more beers and hot tub. What a relaxing weekend.

Sunday morning I got to go to Trader Joe's for my first time. I bought SO much stuff. We will be eating delicious and interesting meals for a MONTH! I really wish I lived closer to one, what a cool store. It was time to head back to Athens. A friend of the family was throwing a 25th wedding anniversary party at their house, a potluck. I didn't know it was a potluck until I called my mom from the car, so I just picked up some crackers and hummus. This potluck was one of the most delicious potlucks I've ever been to. There were two kinds of sushi, stuffed grape leaves (the hit of the party!), four awesome types of cheese (with crackers), grapes, strawberries, shrimp cocktail, barbecued chicken, two kinds of barbecued ribs, orzo salad, rice with edamame and beans, pasta with prosciutto, peas and parmesan, brownies, chocolate chip cookies, blueberry cobbler and butter cake with chocolate frosting. I tried everything but the brownies. I was just TOO full. It was awesome.

Monday and today were pretty regular days. The weather was beautiful on Monday so I got to go ride my bike on the bike path. Today I wasn't feeling well so I stayed home sick. I slept a lot, and watched a movie on the couch. I'm feeling mostly better now, I think I'll be able to go in tomorrow, I still have a headache though. The best part of the day was Charlie in his tub. See, if he lays down with you on the couch, he usually doesn't want to stay very long. However, if he's in something, he will want to stay forever. Today, he got in this plastic tub, and Adam carried him over to me on the couch. He stayed there for HOURS!!! He is so funny. Adam took some pictures: 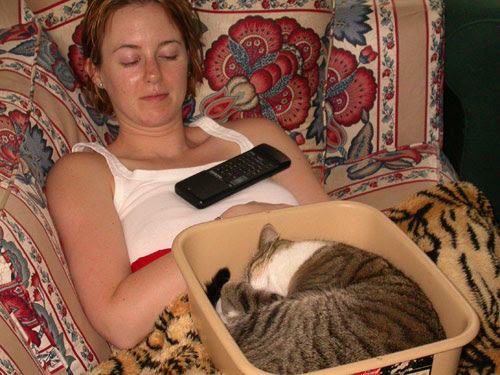 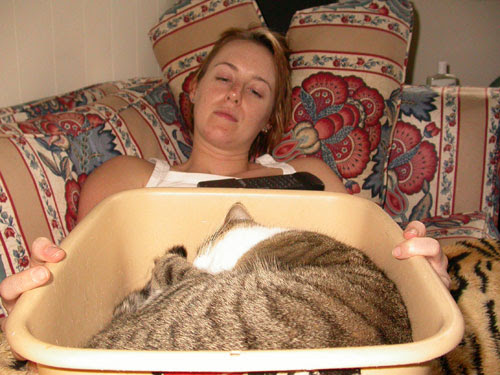 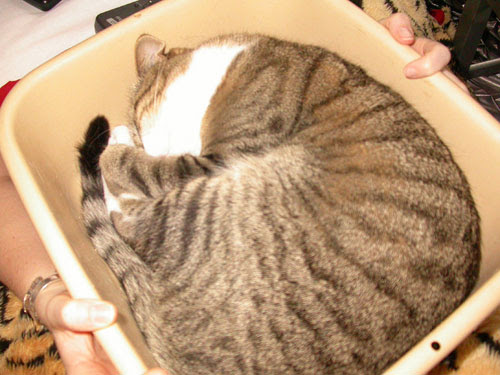 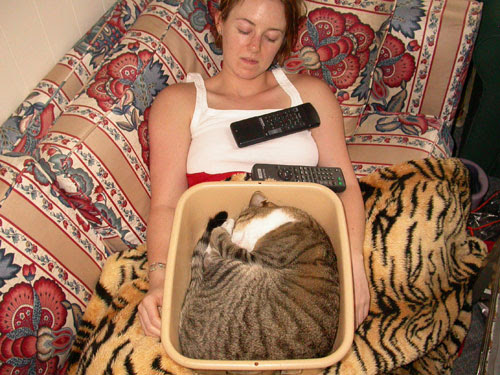 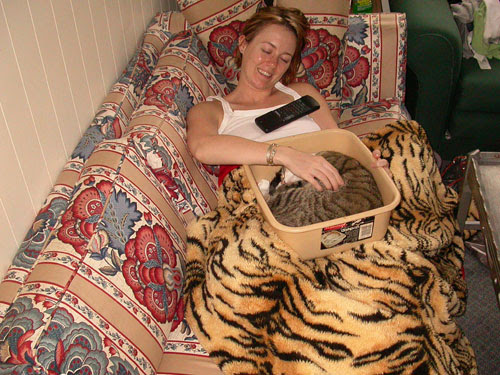 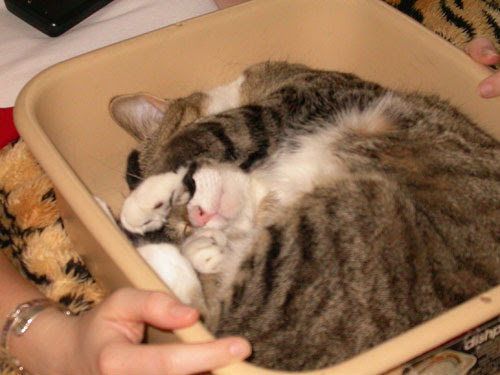 After the movie, I laid around and watched some TV and had dinner and now I'm ready for bed. I thought I would update my web site real quick before bed and guess who decided to join me? Charlie! Yep sometimes he sits on my lap and helps me edit html. 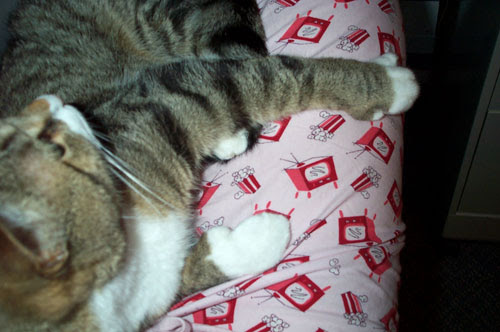 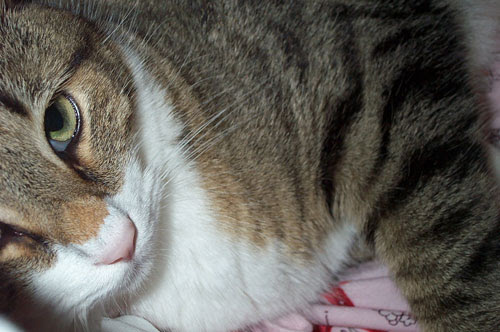 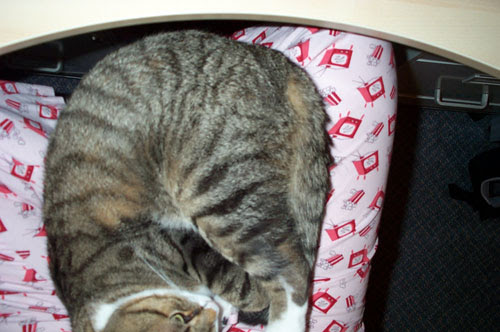 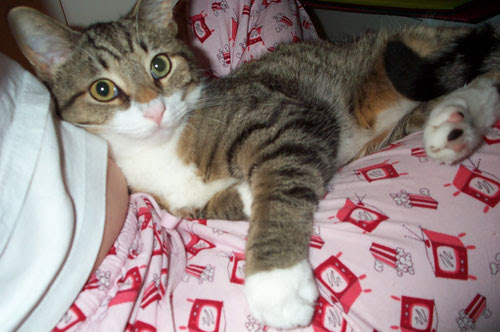 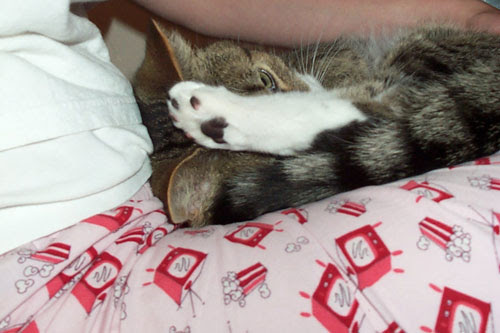 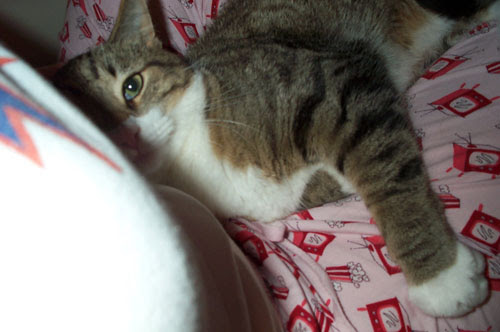 Today was a pretty productive day! First I got up and went and did pet care for my friends, they're out of town. After that I went over to mom's house. We went out to lunch at Burger King, we both got BK Veggie Burgers and salads. Mmm! Then we went shopping at Walmart. Blech. But productive! After that we went to mom's house and I gave her a photoshop lesson. THEN I went grocery shopping, then it was finally birthday party time.

Mom and Dad had Adam and I over for his birthday party. Ivan, this guy in from Richmond Virginia who is learning guitar repair from dad and Adam this weekend, was also there. We had steaks, orzo salad, mixed greens with walnuts, onions and strawberries, sourdough bread and a lovely Pepperidge Farm cake that I decorated. Everything was delicious. Also some red wine. 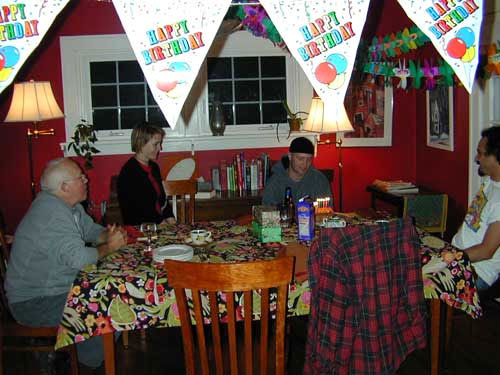 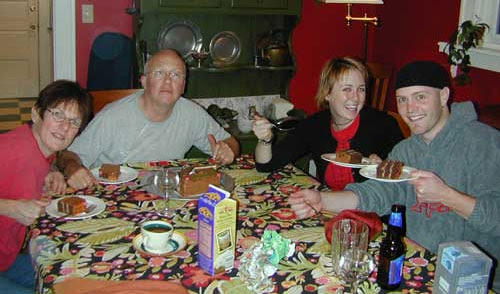 Now I have to get ready for bed, because tomorrow is my first day back for a full week of work.
Posted by orangek8 at 11:51 AM 0 comments

Today was a gorgeous day! It was sunny and the perfect temperature. Summer and I went to our friend Carrie's bridal shower potluck. Mmm. I brought chocolate banana bread. I must say, this particular loaf was delicious. Moist and chocolatey. Mmm. There was awesome food there: fried chicken, mashed potatoes, TWO DIFFERENT black bean dishes (double yum!), fruit with chocolate fondue, guacamole, salsa, spinach dip with pumpernickel bread, and more! Then there was also the shower cake which was the cutest. It was bright aqua with purple, pink and yellow flowers on top. It was also DELICIOUS, because it was lemon. One of my favorite flavors of cake. Oh and mint chocolate chip ice cream too. It was a great lunch.

I went to the shower with Summer, and afterwards she came over. We sat out on the patio and played cards and listened to music. She had brought a new drink concoction that she created. It starts with this wonderful new Minute Maid drink, one of their "Lite" series. It's the Mango Tropical flavor. Then she added some regular rum, and also some Malibu run. The result? A delicious summertime beverage. It was so delicious in fact, that we decided to name it! Since my Mom introduced us to the wonderful world of Minute Maid Lite beverages, we decided to name it Mom's Marvelous Malibu Mango Maui, or "MMMMM!" for short! Hahah GET IT?

So yeah we played Gin Rummy and I won. After that I wrote a letter to my friend Amanda who is in Africa right now with the Peace Corps. When it finally got too dark outside to see I headed indoors. I made Pita Pizzas for dinner and chilled with a magazine. Mary Kate and Ashley are on the cover of the May Allure so yeah I bought it. Hahah and when I bought it, the cashier held it up and waved it around to the bagboy and said "Only 49 days Mike, only 49 days!" Then he rolled his eyes and commented on how he had seen a TV special where they were counting down the days til the Olsen Twins become legal, and how some people need to get a life.

My brother-in-law emailed me some cute pictures of their kitties. Want to meet Mer and Pete's kitties? Of course you do! From left to right, I bring you Ed, Buster, and Lily: 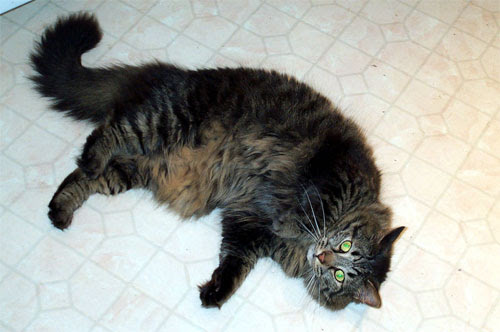 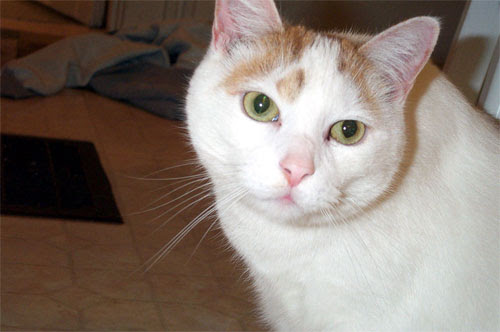 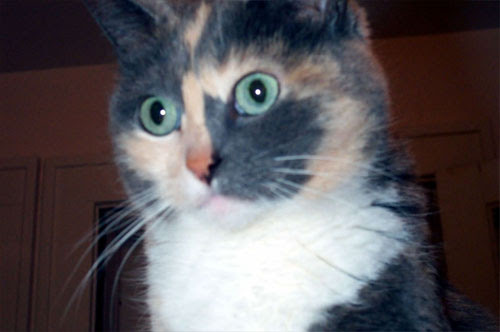