Show Us Your Hidden Talent

I had another weird dream last night. It was my dad's birthday, and we had TWO refrigerators full of cake for him! And there was one piece that I had sliced that I wanted to eat, and I couldn't find it ANYWHERE! My cousin Dan was there (he's my age, but in the dream he was seven). In the living room, there were Christmas trees, and someone had hidden pieces of cake under them. So I searched and searched for my piece of cake. The further back under the tree I went (it went back really far!), the stranger the pieces of cake began to look. They were shaped like little log cabins, and there were little gumdrops and plastic trees and stuff set around for scenery. And I found a present my mom was giving me — it was a stuffed gorilla that talks. It had 300 different things it could say, and its eyes lit up and stuff. It was one of those "intelligent toys" that can learn if you help them. The funny thing is, I don't really like big monkies. I like little fuzzy monkies, but not big ones. And she didn't just get me one, she got me TWO! I never did find my piece of cake.

This was a pretty fun weekend. On Thursday night, Adam and I went out to eat at the Court Street Diner, then went to see The Royal Tenenbaums. It was a pretty cool movie. Friday night, Summer came over and we went to The Union. We just sat at the bar all night, drinking beer and chatting. It was fun. Then on Saturday, I didn't do anything productive all day. Saturday night, Julie and I went to Tony's bar with her roommates 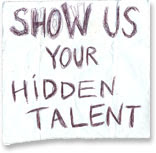 Ann and Megan, and we met our friend Charlie there. My parents have a Volvo station wagon that has seats in the way-back, and when I was little, my friend Jason and I used to sit back there on trips and hold signs out the window to people in cars. Since we were sitting in one of the front window booths at Tony's, I thought it would be fun to hold up a sign to the people walking by! So with a piece of paper I had in my purse, we made a sign that said "Show Us Your Hidden Talent!" We held it up in the window as people walked by, and we had a lot of participants. Here are the results:

It was quite an amazing night. At one point I went to stand in the bathroom line, and I heard these two girls talking, and one was saying "Yeah. I missed seeing that girl's boobs!! Well, not like I WANTED to see it, but I missed it!!" And I said, "Are you talking about that girl who flashed her bra?" And she said, "yes!" and I said, "I'm at the booth that's holding up the signs!!" And she laughed and said "I'm at the booth right behind you!" I thought that was funny. We're thinking about doing it again in the future, but bringing a camera! That would be fun.